By now, unless you have been very carefully avoiding all contact with advanced technology and other people, you have probably heard about bitcoin. In 2008, bitcoin was first described by Satoshi Nakamoto in a paper published on The Cryptography Mailing List. In 2009, the open source software Bitcoin Core was introduced by the same party. It is an interesting side note that nobody really knows who Satoshi is, whether the name is a pseudonym, or even whether Satoshi is a single individual.

Satoshi faded back into the woodwork in 2010, turned over control of the software source code repository and key alert functions to Gavin Andresen, and let bitcoin.org and related domains go to various activists in the bitcoin community. Don't worry about Satoshi - he probably has about half a billion US dollars of bitcoin to call his own.

Bitcoin Mining
Bitcoins come from having computer systems solve certain mathematical problems. Because coins are discovered by performing mathematical calculations, the process is called "mining." Miners may be located anywhere in the world having electricity and an Internet conection. In the early years, bitcoin mining could be performed competitively with nearly any computer. Today, very specialised technology is used. The most efficient bitcoin miners use custom-designed application-specific integrated circuits or ASICs. These chip-based systems perform an enormous number of computer operations in an effort to add new blocks of data to what is called "the block chain." Doing so can generate a reward of 25 newly created bitcoins per block added.

To claim the reward, a special transaction, called a coinbase, is included with the processed payments. All bitcoins in circulation may be traced back to initial coinbase transaction events. The bitcoin protocol specifies that the reward for adding a block is halved about every four years, until an arbitrary limit of 21 million bitcoins is reach. After all bitcoins have been discovered or mined, transaction processing would only be rewarded by transaction fees. It is optional to pay transaction fees, but doing so may speed up the confirmation of the transaction. Miners can choose which transactions to process, and obviously would prefer to process transactions that pay fees.

The Blockchain
Every bitcoin comes with a database of transactions called the blockchain. This part of the bitcoin system is very important. The blockchain is a public ledger that records financial transactions in bitcoins. This recording function is performed without any central authority. Multiple intermediaries exist in the form of computers running bitcoin software. Connected over the Internet, these computers form a network that anyone can join.

Now that the above transaction is confirmed 558 times, it is very, very deeply embedded in the blockchain. It cannot be undone. It cannot cease to have been. That event is fixed. It has been added to a large number of copies of the database of bitcoin transactions.

About six times an hour a group of accepted transactions, a block, is added to the blockchain which is quickly published to all network nodes running relevant copies of the open source software. The software subtracts the necessary amount of bitcoin from one wallet and adds it to another. So, the wallet software and the fact that the transaction is widely published prevents double-spending.

As you can see from the indicated transaction, any text may be used to comment on the purpose of the transaction. It need not be spelled correctly, as the capitalisatoin error shows. And the description is entirely optional. 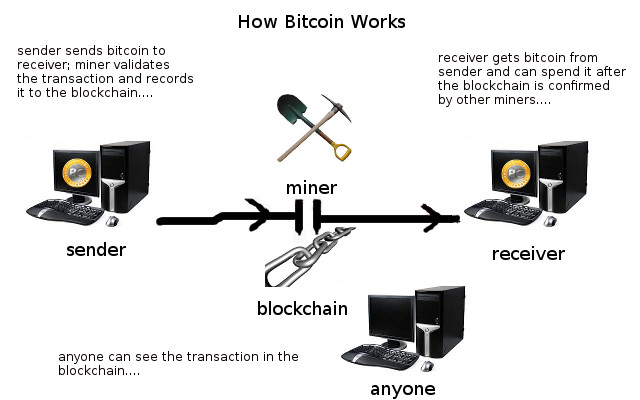 Drawbacks of the Blockchain
The blockchain grows and grows. A recent comment from one user suggests that it is about 33 gigabytes at present. It isn't going to get any shorter, as more users spend more amounts of bitcoin to more other users. In addition to its increasingly cumbersome size, the blockchain is fully public, by its nature. So there is no financial privacy using bicoins directly.

The success of bitcoin as a currency has, naturally, generated similar entries in the market. One of the really nice things about fully decentralised, open-source software systems is that if you can build one, someone else can build another. There are now dozens of active bitcoin-mimicking software systems, such as Litecoin, Dogecoin, and many more. The same cryptographic protocols have also been used to show chain of ownership of domain names (Namecoin) and are being pursued for creating public ledgers of other types of assets, such as real estate. Digital rights management, voting, smart contracts, and money transfer all work with blockchain software.

Enter SilentVault
In the midst of all this technology development, the needs for economic privacy, information security, and anonymity remain. When you make a cash transaction at a store you've never previously visited, you can be entirely private, anonymous, and secure in the knowledge that your cash is accepted and you are on your way with what you bought. You may be aware that some merchants treat cash transactions with enthusiasm. It is quite likely that not every cash transaction is reported to the sales tax authorities in every jurisdiction where such taxes are collected from merchants.

SilentVault has implemented a technology called Voucher-Safe which provides for the creation by currency issuers of digital bearer instruments for assets in the possession of the issuers. These digital bearer instruments are called vouchers. Vouchers are circulated within the SilentVault system, and the circulation of them is paid for with tokens. At current prices, a token cost about 5.5 cents (in US$). 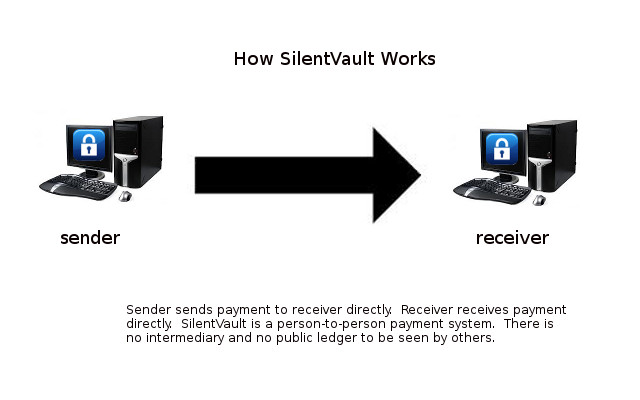 How It Works
"You can bring bitcoin in and arrange to spend it back out, any time, anywhere," Justin Turrell of the SilentVault team says. "Once you have assets in your SilentVault wallet, you can use it to make person-to-person payments to other SilentVault wallets, offer or accept exchanges for other supported types of assets, or redeem your vouchers."

SilentVault currently supports bitcoin, Litecoin, and Silent Silver. There is a built-in exchange where transactions between two parties who do not know each other can take place through escrow. Each party in the exchange can post an offer, make a payment of the offered asset to escrow, and await acceptance. The party accepting an offer also makes a payment to escrow, and the escrow system automatically transfers the assets to the respective users, keeping a 1% fee from each party. Exchange offers can be given short or longer expiration periods.

Misconceptions
Bitcoin is often called an anonymous payment method, but that is a mistaken idea. Bitcoin is, at best, pseudonymous. Anyone who knows your wallet number can look at the funds you've transferred and the recipients. Anyone who knows the hash or destination address and the amount of a particular transaction can probably find that event in the public record, in the blockchain.

There are other ways to obscure this data. A technique called "coin join" attempts to mix payments together, making smaller payments simultaneously to attempt to obscure the data in the blockchain.

Other people try to identify bitcoin users. Systems that tie your bitcoin purchases to a bank account such as Coinbase or to a credit card such as Trucoin are required by law to comply with anti-money-laundering (AML) and know your customer (KYC) laws in the countries where they operate. Necessarily, their data is open to government agencies in law enforcement, including tax enforcement. So, transactions involving such systems may expose users to undesirable scrutiny of their financial affairs. Careful research can reveal someone's wallet number and purchase history. SilentVault can help solve that problem.

SilentVault marketing and business development lead Tyrone Johnson says, "SilentVault is to bitcoin what an offshore bank account is to mainstream banking. Within the SilentVault system there is no ledger of transactions. So while you make payments with your Silent Bitcoin and those who receive your payments use their Silent Bitcoin to make further payments, nothing is registered on the block chain. No transaction, including an internal voucher asset to voucher asset exchange, generates an entry on the blockchain. Only when a bitcoin is exchanged out to a bitcoin wallet destination does any new information show up on the blockchain. If you value your privacy, you'll prefer a silent blockchain."

The company has deployed two open-source wallet applications. The SilentVault WebApp is built as an application for Java webstart. This means that it can be installed and invoked from within your browser, but runs in a Java virtual machine independent of your browser. After you've installed it, you can start it from the icon installed on your desktop without needing to use your browser at all.

The SilentVault Spark Jabber (XMPP) client or plugin aka SVSpark is both a robust Jabber chat client (based on Spark 2.7) and a secure p2p wallet
client. The wallet client is implemented as a Spark plugin. Other plugins provide OTR (off-the-record) for end-to-end chat encryption, voice communication, and a host of other features. SVSpark is aligned with their slogan "payments are just another kind of message." The SVSpark wallet's desktop icon is a blazing flame, reminiscent of Wyatt's Torch from the novel "Atlas Shrugged."

You can get more information by visiting their secure web address https://SilentVault.com/